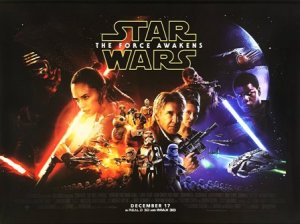 Today’s article is a guest post by my brother Vonrick. He’s a big Star Wars fan (as are we all) and wanted to voice his concerns about the new movie The Force Awakens. Here’s what he has to say:

The Force is with us again, and that means we get to revel in more lightsaber swinging, laser blasting, Millennium Falcon flying action.

But for those of us who grew up in the 80’s, all this recent activity looks kind of familiar. The new Star Wars movie echoes a lot of events from the original released way back in 1977.

Now it’s good to learn from past success and give the audience more of what they want, but that’s no reason to dust off the carbonite copy and use it as a template. Even Han Solo could tell you that carbonite isn’t that flexible.

Seen the movie but can’t quite put your finger on the similarities?

Here are 6 reasons why Star Wars the Force Awakens is just like Star Wars a New Hope. Warning: LIGHT SPOILERS ahead. 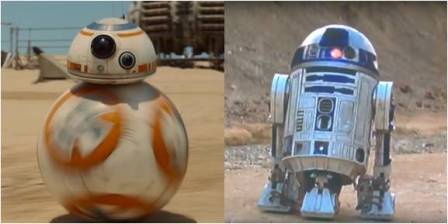 Poe Dameron is on the run from stormtroopers because he has some important information. He places it in a cute little droid called BB-8 that talks with beeps and whistles. After that, he’s captured for later interrogation. Now what makes this information so important is that it reveals the location of Luke Skywalker, considered the key to bringing down the enemy.

Well this scenario is exactly the same as Princess Leia attempting to escape stormtroopers and hiding some important information in a cute little droid called R2-D2 that talk with beeps and whistles. After that, she’s captured for later interrogation. And the information is important because it reveals the weak point of the Death Star, considered the key to bringing down the enemy.

These guys have got to get faster stormtroopers. 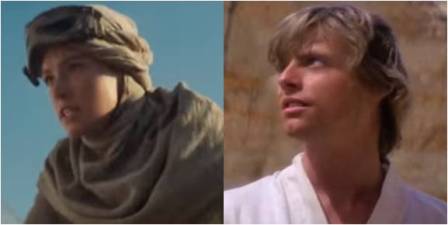 The story starts off on the desert planet Jakku where protagonist Rey, who is dressed in white and is strong in the force, comes across the BB-8 droid by coincidence. After the Empire… oh sorry… the First Order discovers that Rey has the droid, she is forced to leave Jakku… in the Millennium Falcon.

Is this story arc original?

Because I seem to remember a certain Luke Skywalker, dressed in white and strong in the force, came across two droids by coincidence, got discovered by the Empire’s stormtroopers and was forced to abandon his desert planet Tatooine… in the same Millennium Falcon.

Adding to that, Rey and Luke both were left on their planets as children.

Seems this galaxy far far away is full of terrible parents.

Masked Sith Lord Kylo Ren, who was trained by and betrayed the Jedi, leads a squadron of stormtroopers to retrieve the location of Luke Skywalker.

Masked Sith Lord Darth Vader, who was trained by and betrayed the Jedi, leads a squadron of stormtroopers to retrieve the plans for the Death Star.

Maybe padawans should answer a short survey before they start their training.

Meet Finn, the funny sidekick who hangs around with BB 8 and talks way too much.

Do I even need to explain?

And being a stormtrooper instead of a golden droid doesn’t make it original. 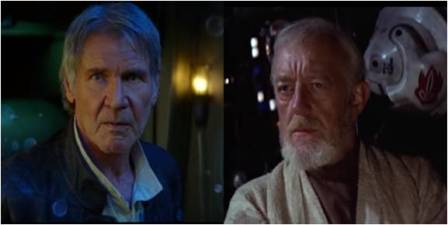 Han Solo, as crazy as it sounds, is an aged and wizened adviser who guides Rey to her true destiny. Eventually Han confronts the Sith Lord Kylo Ren and, in full view of Rey, willingly allows himself to get killed.

Ever heard of a man called Obi-Wan?

Well legend goes that he was an aged and wizened adviser who guided Luke to his true destiny. They say he even faced the Sith Lord Darth Vader and, in full view of Luke, willingly allowed himself to get killed.

Starkiller Base, a moon-sized starship of the First Order armed with a laser so powerful that it’s capable of destroying entire planets. But there’s a weak spot – an area that an X-Wing can fire a torpedo at if it flies through a trench at just the right angle.

May I present the Death Star, a planet-sized starship of the Empire that was armed with a laser so powerful that it was capable of destroying entire planets. This monstrous weapon also had a weak spot, and X-Wings fired torpedoes at it after flying through a trench at just the right angle.

Obviously, no one bothered to check the Jedi archives before building this thing.

So these are 6 reasons why Star Wars the Force Awakens is just like Star Wars a New Hope. Can you think of any others? Let me know in the comments.