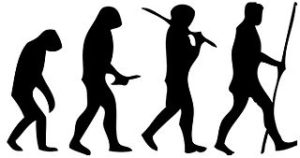 Well I’d consider myself lucky to get anyone to read a story in a world like that.

Sure, the world sounds interesting, but it’s like I travelled through time picking all the stuff I loved about every era and brought them together to form some great mosaic of technology.

Society evolved in a way so unlikely that it borders unbelievable. And unbelievable is bad.

Now it’s through that fantasy is a world created by imagination, but it must stay within the bounds of evolution if readers are going to relate to it.

In my example, I had a great city with electricity, yet people walked around in breeches and guards armed themselves with swords. If there’s electricity then firearms would have been developed, so swords wouldn’t be used unless for some form of decoration.

And the fashion is off, suggesting that after centuries of accumulated knowledge, everyone still dressed the same.

Also, the existence of magic severely affects the direction of technology. Why develop an engine when you can invoke objects into motion, or a generator when you can summon electricity with your hands?

The Arc of Technology

Technology develops along an arc, where older methods are replaced with newer advancements.

The design of defensive walls changed as engineers developed better siege engines like trebuchets, with walls taking on a broader, more squat appearance. Armorers had to keep upgrading their armor as new weapons came out, and with the advent of gun powder, the armored knight faded into the past since metal became easier to penetrate.

Steam power can replace horse power. Electricity might replace steam. Civilization tends to use different designs and fashion based on what powers an economy. So in my world, I have to decide, do I want horses to be the primary method of transport, or do I want engine-powered vehicles? Do I want swords or firearms? Does my magic support technology, or will it be difficult and confined to a minority?

And if there’s space travel then there better be a damn good explanation for covering all those vast distances.

I might be able to combine elements into a modern society like in J. K. Rowling’s Harry Porter novels, but notice how one world is kept secret from the more dominant one.

So which one did I choose for my novel Guardian of the Cursed Crown?

I’ve always preferred an era of horse drawn chariots and armored knights, just before gun powder becomes prevalent, and magic is kept to a minimum.