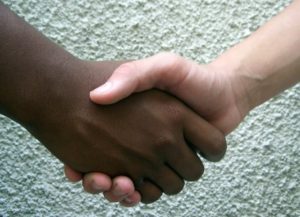 Because fantasy is based on a medieval era where it is perceived that noble knights roam the land seeking adventure and performing quests for great kings living in even greater castles, it’s tempting to fill an entire world with that design. Everyone has the same pale complexion, dresses in the same clothes, lives in the same type of kingdoms and speaks the same language.

You never hear about a coloured knight slaying a dragon, climbing the highest tower and saving the beautiful black princess.

This single-race dominated world works for fairy tales and old Hollywood movies, but it’s terrible for current-generation fantasy novels, especially when it has a mixed fan based the world over. Not only does fantasy now require it, fantasy demands it.

Readers and critics generally frown upon a fantasy world so dull and unimaginative that it contains only one race of people saving the day, no matter if that one race is European, African, or Asian.

For a fantasy world to be believable, it must possess a variety of people.

But it’s not just about throwing in an African guy or an Indian girl, or flipping the colour of a character and thinking the world is diverse.

Every race has their roots, and these roots need worlds of their own.

Sticking with the medieval era, Africa had several empires of dark-skinned people, led by chiefs and Muslim kings. The way they dressed was quite different. The architecture for their cities, castles, and strongholds was quite different, designing their buildings using fractal scaling – smaller parts of a structure looking similar to larger parts.

India also had several empires with people who favoured vastly different styles. Instead of knights, you might find rajput warriors.

And don’t even let me get started on China. We all know how different their culture can be.

Now consider a world of various races from different regions. Maybe some are rich with resources like silk, and maybe some have mastered skills like metalwork.

Sometimes they trade their resources, and sometimes they war over land. Characters from these different lands come across each other for different reasons. Some even fall in love.

Select characters from these different regions, keeping in mind the difference in complexion, clothes, language, and your world is now truly diverse.

I have done this with my novel Guardian of the Cursed Crown, and it all plays into the story nicely.