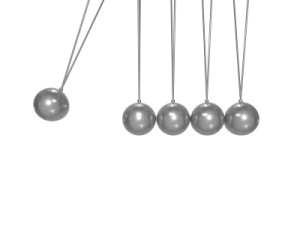 Image courtesy of BimXD at FreeDigitalPhotos.net

It’s amazing what you learn at the Barbershop. It can range from what’s the real purpose of a goatee to the best way to discipline your kids.

The most recent and surprising lesson I learned was about writing.

While going through the annoying and almost fortnightly process of getting a haircut, my barber reminded me of a rule that was long lost in history: an object at rest needs more force to move than an object in motion.

How this reminder came up is a long story, and beside the point. It got me thinking about circuit boards and centripetal forces and equations that jump over each other. And somehow writing snuck in there.

Have you been struggling to get back in the writing zone? Is the thought of writing more painful than cooking for your mother-in-law?

If yes, then maybe this law of physics is exactly what you need to get going again.

There are many reasons why you could be having problems with your writing. Maybe you’ve been rejected and you’re licking your wounds on the sideline, or maybe you thought that your writing was too terrible.

But it’s not the terrible writing that’s the problem, nor is it that rejection. The real problem is the break from writing.

Now I’m no physics expert so don’t get angry if I mix up a thing or two, but if memory (and Google) serves me correctly, somewhere in Newton’s laws was something about an object at rest tends to stay at rest while an object in motion tends to stay in motion.

Objects tend to keep doing what they’re doing. This resistance to change is called inertia.

Good work, Newton. Who knew he was actually talking about writing?

So, according to Newton’s law, if you haven’t been writing recently, then it’s going to be tough to start writing again.

You’ll probably keep saying things like, “I’ll start back tomorrow” or “It’s too hard, a little later I’ll write something”, and then you’re off to watch another episode of Breaking Bad.

Just like that object at rest that’s resisting motion, you’re resisting writing. The longer you put things off, or the longer you take a break, the harder it’s going to be to start again.

It’s a vicious cycle of not writing leading to the reason it’s so hard to write in the first place. So now that you know you’ve got no inertia, how do you apply the right amount of force to get going again?

Put the Inertia Back into Your Writing

Think about how excited you were when you first thought about writing. Was there a story idea that you just had to tell to the world?

Maybe you already have a large chunk of your novel written, something you were excited about, and for some reason you can’t seem to finish. Go back and read your favourite part to rev up your writing passion.

You probably have a favourite author, someone whose work you read and thought that you could write a story just like that. Go back and read it. Or you can read one of her new releases.

If you can get back into the state of mind when you just started then you will be able to resume your writing.

And this doesn’t just apply to writing. It applies to any project, whether it’s painting, carpentry, and yes, even physics.

Now, don’t get me wrong. Taking a break is good. Vacations are healthy, but don’t let it extend so long that you come to a complete stop.

Remember, the law of inertia tells us that it’s going to take a lot more to start back up again. No wonder the weekends are so short.

So it’s time to resume your writing. And once you get your inertia, keep it by writing at least four times a week and you will never leave the zone again.

What do you think about Newton’s law of writing? Let me know in the comments.