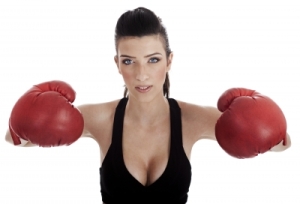 Here’s the top five that I’ve come across in movies.

Note that I’ve avoided supervillains as there’re so many that it deserves its own post.

Come on up. I’ll show you how your father died.

Lord Nelson wishes to be king of England, but being tenth in line leaves him with an extremely long wait, if ever.

Unless he kills his entire family.

Now Chon’s been kicking everyone’s ass in very resourceful ways for the majority of the movie. But then he finally confronts Lord Nelson and things get really interesting.

You see, Lord Nelson is the most skilled swordsman in England, having won all tournaments, and proves this by easily defeating Chon.

What I love about this confrontation is Lord Nelson’s relentless taunting. His competitive nature shows when he defeats Chon, then gives back the sword and says “One more.”

I thought the concept was incredible. Chon literally got defeated three consecutive times, proving that all his martial arts skills paled in comparison to Lord Nelson’s superior ability with a sword.

His only option: self-sacrifice. 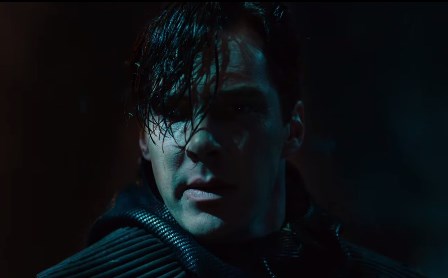 Fans of the original Star Trek would remember Khan from the 1980 movies and television series, but I love how Khan is portrayed in the latest film, Into Darkness.

Revived by Admiral Marcus to develop advanced weapons for war against the Klingon Empire, Khan is a one-man army of mass destruction. This guy has super strength, super reflexes, and super healing abilities, pretty much the ultimate soldier.

When Captain Kirk pursues Khan to the Klingon home world Kronos, they get into big trouble with the locals.

Then Khan shows up, holding a phaser in one hand and some type of advance gatling gun in the other.

He defeats all the Klingons, shoots down there ship, shows Spock who’s really in control, then surrenders.

Captain Kirk then punches Khan so many times he damages his own hand, and Khan just stands there like “Are you done, Captain?”

This guy is so strong that it takes Spock, Uhura, and the crash of a large Federation warship to take him down. 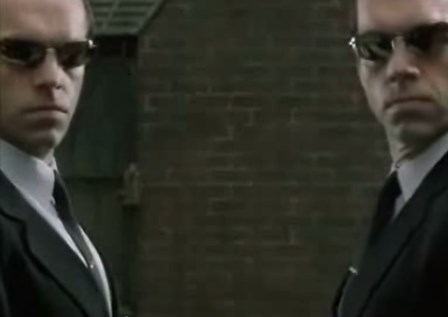 All problems experienced in the Matrix can be summed up in one word: Agents.

No one has ever faced an agent and lived. But there’s one in particular who leads the others: Mr. Smith.

Smith hates the human race and is determined to capture the rebel leader Morpheus. Then he comes across Mr. Anderson, who later goes by the name Neo.

Neo’s been told that if he ever faces an agent, run. Even so, he still decides to confront Smith.

Fortunately for Neo, he is the One, and becomes more powerful than Smith, at first.

Ignoring the rules of virtual death, Smith returns to the Matrix with the ability to duplicate himself by consuming the bodies of others.

The final fight between Neo and Smith is epic, both characters zipping around the city at supersonic speeds.

And even if Neo beats one Smith, he still has a gazillion more to go.

If Morpheus had only mentioned this, Neo might have told him to take that red pill and shove it.

There have been many versions, but nothing beats the original Predator released in 1987.

With iron claws strapped to their arms, laser-targeting plasma launchers mounted on their backs, and hairstyles like Bob Marley’s, Predators scour the universe in search of great prey.

When one lands on Earth and comes across a team of Special Forces in Guatemala, it decides to pursue.

Dutch and his elite team suspect something’s not right when they find the skinless bodies of the previous team, and later on hear the words “The jungle came alive and took him,” but never would they have guessed what’s actually going on.

Observing them from the canopy, staying hidden with advanced camouflage, impaling and blasting them before they can defend themselves, the Predator hunts and kills off the entire team.

When Dutch finally confronts it, he learns that he is no match for the superior technology and superior strength of the Predator, and it shows with the bloody battle in the end.

If it wasn’t for his trapping ability, Dutch would have surely ended his career upside down and skinless. 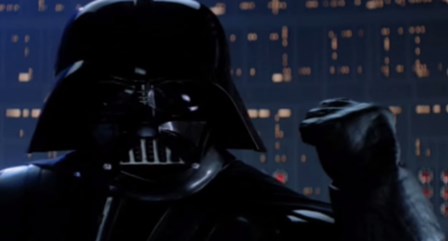 If you only knew the power of the dark side

Admit it. At some point during your life, you’ve placed a mask over your head, took deep droning breaths and said “I sense something… a presence I haven’t felt since…”

In the unlikely case that you’re not sure, those were the famous words of Darth Vader from Star Wars.

Once a Jedi thought to bring balance to the Force, Darth Vader is now a ruthless general in the Galactic Empire.

Master of the dark side of the Force, destroyer of planets, carbonite freezer of Han Solo’s, this guy has turned his back on compassion.

It was great seeing him duel with Obi-Wan in A New Hope, but his confrontation with protagonist Luke Skywalker in the Empire Strikes Back is truly amazing.

Luke does his best, but so unprepared is he that he pays with his hand.

Only after becoming a Jedi master is Luke able to defeat Vader, and even then he has to be careful as that would result in him becoming enraged in hate and accepting the dark side, taking over where Vader left off.

While enduring force lightning blasts from the Emperor himself, Luke resorts to his only hope: begging daddy for help.

So these are my top five movie villains who were too much for the hero. What do you think? Did I forget anyone? And who are your top 5? Let me know in the comments.