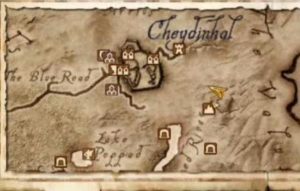 So seeing that I have this passion, it surprises me that one of the mistakes I made when I first started writing fantasy was not truly mapping out the world my character lives in.

Writing Without a Map

I had a general idea, sure. In my novel the Cursed Crown, King Larsen leaves his city and journeys north into a dangerous land to revive his wife.

I knew he’d ride across a field, trod through a forest, and over a mountain, but I had no concept of the continent this all takes place on. There were no major rivers, no beaches, not even an ocean. There were only two major cities that I mentioned a couple times, and even those didn’t have an exact location.

I knew where Larsen would end up if he headed north, but what if he went south? What if he encountered a river and followed it downstream? What if he reached a harbour by the sea and hired a ship?

Everything was mapped more like a movie set of painted plywood than an actually living, breathing world.

Mapping out the World

Even though my editor Jesse pointed it out, it didn’t really hit me until I read Joe Abercrombie’s The First Law Triology, but not from his excellently designed world, but rather from the city Adua.

The city has several land marks that he mentions. You read about places like the Agriont Fortress, the Lords’ Round, the Kingsway, and the towering House of the Maker.

Not only do you explore these building in great detail throughout the story, but you also get a sense of their locations within the city, making it feel three dimensional.

I tried something similar in my short story Mynsaw’s Army. I created a town called Lenia, placed it on the eastern side of Wyden Lake, and drew a map of its roads and buildings. I marked the locations of the Keep, the wide roadway leading up to it, added Upper and Market districts, and gave it a port.

Keeping these places in mind, I wrote the story, and it feels like some of my best writing yet.

The idea worked so well that I expanded the map into an entire continent, and islands beyond that.

This world is where all my stories from the Cursed Crown takes places. I took influence from real life since, well, that’s already up and running and works so great.

And having it mapped out makes Larsen’s journey even more exciting to read.

3 Thoughts on “Elements of World Building – the Map”