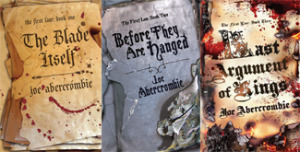 Logen: “I’ve fought in three campaigns, in several pitched battles, in countless raids and skirmishes and desperate defences, and bloody actions of every kind. I’ve fought in the driving snow, the blasting wind, the middle of the night. I’ve been fighting all my life, one enemy or another, one friend or another. I’ve known little else. I’ve seen men killed for a word, for a look, for nothing at all. A woman tried to stab me once for killing her husband, and I threw her down a well. And that’s far from the worst of it. Life used to be cheap as dirt to me. Cheaper.

“I’ve fought ten single combats and I won them all, but I fought on the wrong side and for all the wrong reasons. I’ve been ruthless, and brutal, and a coward. I’ve stabbed men in the back, burned them, drowned them, crushed them with rocks, killed them asleep, unarmed, or running away. I’ve run away myself more than once. I’ve pissed myself with fear. I’ve begged for my life. I’ve been wounded, often, and badly, and screamed and cried like a baby whose mother took her tit away. I’ve no doubt the world would be a better place if I’d been killed years ago, but I haven’t been, and I don’t know why.”

So in summary, I’d say yes Logen has seen a lot of death.

Two Northmen travel to Adua, one a grizzled old and scarred warrior named White-Eye Hansul, the other a giant with blue runes scrawled across half his body called Fenris the Feared.

They come before the Open Council, a gathering in a hall of all the nobles including the King himself, with a message and a gift:

White-Eye: “In the North we have a tradition. On occasion, when there is bad blood between two clans, when there is the threat of war, champions come forward from each side, to fight for all their people, so that the issue might be decided… with only one death.

“His Greatness, Bethod, sends the Feared not only as his envoy, but as his champion. He will fight for Angland, if any here will face him, and spare you a war you will not win. This is my master’s gift to you, and there could be none richer… your lives.”

Fenris’ right hand then darts out and snatches a knife in a box held up by White-Eye, raises it high and shoves the entire blade in his own shoulder. He looks out over the crowd, and with great cords of sinew bulging from his neck, he screams, “Who will fight me?”

Glokta is among them, and he is determined to hold the city. When he jokes about surrendering once the fighting is over, the ambassador looks out the window and reminds them of the situation:

Ambassador: “If there is to be fighting, it will not last long. I see five legions, arrayed in battle order upon the peninsula. Twenty thousand spears, and they are but a fraction of what comes. The troops of the Emperor are more numerous than the grains of sand in the desert. To resist us would be as futile as to resist the tide. You all know this.

“Only fools or madmen would choose to stand against such odds. You pinks have never belonged here. The Emperor offers you the chance to leave the South with your lives. Open the gates to us and you will be spared. You can leave on your little boats and float back to your little island. Let it never be said that Uthman-ul-Dosht is not generous. God fights beside us. Your cause is lost.”

Maybe Glokta should rethink his decision.

After being punched in the face with a bony fist, cracked in the head with a bathroom door, and held down in a tub full of dirty water until his lungs almost burst, Glokta finally hears Ferro’s voice demanding answers.

He sags back against a wall, his eyes fill with tears, and when his focus returns, here’s what he says to his torturer:

Glokta: “I think you might have loosened my neck up just a fraction. For two years I was a captive of the Gurkish. Two years in the darkness of the Emperor’s prisons. Two years of cutting, and chiseling, and burning. Do you think the thought of a slap or two scares me? It hurts more when I piss! Do you think I’m scared to die? Every morning… that I wake up alive… is a disappointment!”

You got to love Glokta’s look on life.

Bayaz addresses the King of the Union

Bayaz enters the King’s chambers to offer his advice, and instructions.

The conversation takes a bitter turn, and in trying to calm himself, the First of the Magi loses his patience:

Bayaz: “You cannot understand what it is to live as long as I have. To know all that I know. You people are dead in the blink of an eye, and have to be taught the same old lessons all over again. The same lessons that Juvens taught Stolicus a thousand years ago. It becomes extremely tiresome.

“Every man seems a child to me. When you reach my age you see that history moves in circles. So many times I have guided this nation back from the brink of destruction, and on to ever greater glory. And what do I ask in return? A few little sacrifices? If you only understood the sacrifices that I have made on behalf of you cattle!”

So those were my top five dialogue from the First Law trilogy. Which one is your favorite? If you’ve read the books, what’s your top picks? Let me know in the comments.