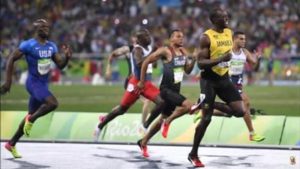 Once again he’s proved to the world that there is no one faster, and seeing him win the 100m and 200m events made me wonder, is it possible to write as fast as he runs?

I’m certain it is. Let’s review the facts necessary to make the world’s fastest writer.

There’s no way Bolt could have gotten to where he is now without practice.

The ability to blaze down the track, smiling and pounding his chest as he crosses the finish line with the fastest challengers every country has to offer several feet behind could only happen by training over and over, several times a week.

It’s no different with writing.

The more I write, the better I get at it, and the faster I’ll be able to pour out the words. I’ve already felt it when I compare my current productivity with previous times when I’d stall for weeks

If I’m going to perform anywhere near writing several words in under 20 seconds, I have to practice.

What you put in your body is what you get out.

Food turns into nutrients that fuels every muscle, and if you want to produce record-breaking power, then you need to consume lots of proteins and carbohydrates.

And whether Bolt uses dasheen and cassava, or an undetectable testosterone developed by some mad Jamaican super-genius, the results are clear.

Similarly, if I want to produce record-breaking productivity, I need to consume lots of good writing food.

By using books in my genre – science fiction fantasy.

No, I don’t eat them. Instead, I read lots of what my audience loves. A writer must read, and read often, else get left behind.

If only I weren’t such a slow reader, but I’m working on it.

There’s an exact place and time to break a world record.

A place where the tarmac is level and offers perfect traction. A time when the weather is ideal. The sun isn’t blazing down, the wind factor is low, and rain hasn’t caused puddles of water to collect.

At this moment, when the conditions are perfect, you know history is going to be made.

I’ve found this moment for my writing.

It’s just as the sun comes up in the morning, after I’ve had bacon and eggs, a bowl of cereal, some fruit, and a cup of coffee. It also happens just as the sun is about to set, when I’m sitting in a coffee shop that sells blueberry muffins and provides free internet.

At this moment, I’m ready. My inspiration is at its highest. I hear the sound, and my writing begins.

No athlete trains day in and day out, waking up earlier than the sun to hit the track or pool, sacrificing great-tasting junk for bland healthy food, just for a pat on the back.

There’s a reward, and the honour of standing on an Olympic podium while a pretty girl brings forward a golden medal, all to the cheer of hundreds of thousands, is very inspiring. I’m sure Bolt agrees.

While I’ll never receive anything close to that for my writing, I still have a gold medal to win.

Of course, lots of money wouldn’t hurt (I still need to eat), but that’s not why I write. Ultimately, I want to publish many entertaining stories that will be talked about the world over. Maybe even get a movie or two.

These medals are my inspiration to hit it hard and fast.

Have you ever seen an athlete win an event without celebrating? It’s pretty much none-existent.

And no wonder. The feeling of winning an event is so exhilarating that you can’t help but do some kind of dance.

They come in all forms, from swan dives and arm windmills to backflips. Some are so entertaining that fans explode to their feet and celebrate along with them, even if watching miles away at home on the couch.

No matter the action, celebrations are fun, something to look forward to. We can’t wait to show off our moves in that great moment.

I’ve got my own celebration for reaching an accomplishment, and while it’s not as attractive as Bolt’s signature lightning/to the world pose, eating something tasty and watching that favourite classic movie is just as satisfying.

Did I miss anything? Do you think it’s possible? Let me know in the comments.