Collecting Rejections for My Writing 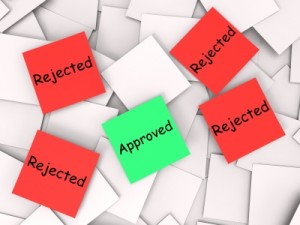 So I’m pretty much finished writing my first novel, Guardian of the Cursed Crown.

After two and a half years, five drafts, and advice from beta readers, I’d say it’s almost ready for the world.

From here I can go two ways. The first is to get an agent. Once I’ve hooked one, then she will get a professional editor, a book cover designer, and push to get it published.

Now, actually getting an agent is one of those many things in the world that’s easy to say but hard to do.

So How Exactly do You Get an Agent?

I’ve been finding agents through blogs like Writer’s Digest. Note that not every agent is interested in every genre, so it’s always good to read their about page.

If an agent is suitable, you shoot them a query letter, which consists of a hook, a pitch, and a bio.

Even though there are tons of advice on how to write a query letter all over the Internet, writing the damn thing can still be almost as hard as writing the entire novel. Things get even more complicated when they ask for a synopsis.

The person who came up with the idea of cramming 250-300 pages into a couple of lines was just nuts, but if that’s what they want then I’ll just have to go with it.

I’ve been rejected about 10 times, enough to start a collection. But the way I see it, I have 90 more to go, so I better get going.

Why I’m I trying so many times?

Did you know Carrie by Stephen King was rejected 30 times?

How about Gone with the Wind by Margaret MItchell, rejected 38 times.

As you can see, it’s rare for a writer to find an agent in the first query letter. You just have to be persistent.

And What Happens When I Reach 100 Rejections

This is where I’ll go the second way: self-publishing. There are benefits, like I get to keep most profits (maybe even all depending on how I publish), but it’s going to be expensive.

If I want to release a polished book, and every writer should, then I’ll have to hire my own editor and book cover designer. After all, I don’t want some garbage with my name on it to be my debut novel.

So what do you think? Would I reach 100? And are you doing something that you’ve reached a major hurdle? I’d love to know in the comments.

6 Thoughts on “Collecting Rejections for My Writing”