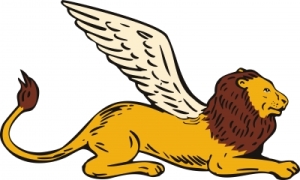 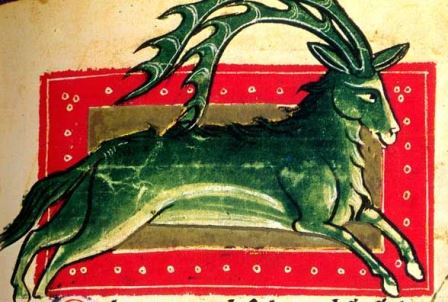 Originating in Ethiopia, this creature was admired for its ability to adapt to every challenge. Like a chameleon, it could change the colour of its skin to camouflage with its environment as a means to escape predators and hunters, making it extremely hard to capture. Some say it could even change its shape at will.

Its hide was so hard that it was used to make breastplates. 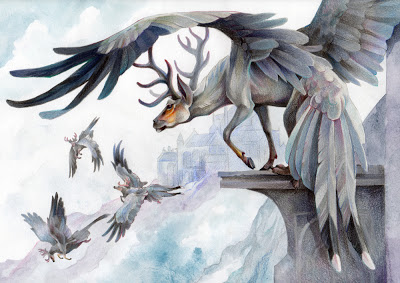 In the Book of Imaginary Beings, Borges describes the Peryton as creatures that abandoned Atlantis after it was destroyed by an earthquake. But other sources believe that they were once human, either from Atlantis or just sailors lost at sea, and their shadows show their original human form.

Combining the head, forelegs, and antlers of an adult stag with the wings and hindquarters of a giant eagle, it produced both the smell and shadow of a human. Using its shadow as a trick, it hunted and killed a human after which it would finally cast the shadow of its own body and its restless soul would be free.

Its body was invulnerable to normal blades and it usually only killed one human in a lifetime. 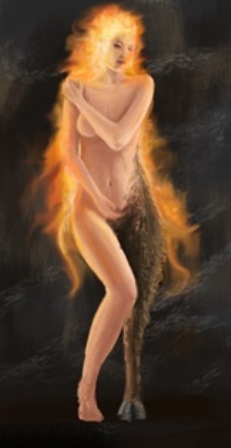 Originally believed to be the daughter of the Greek goddess Hecate and the spirit Mormo, but then later downgraded to a mere servant, this creature was sent to guard roads and devour travelers.

She seduced young men with her charm and beauty. Then, when the time was right, she drank their blood and ate their flesh.

But one theme was always constant: she had a slamming figure. 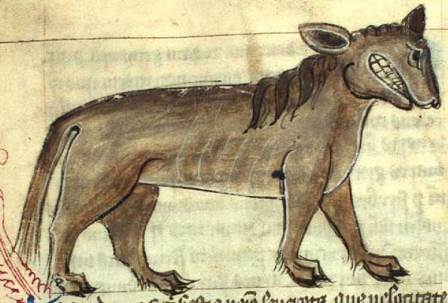 In parts of Ethiopia and India, there was an animal called a Crocotta that had amazing strength, was the fastest of all beasts, and could imitate the human voice and call men by name.

It hid in bushes at the edge of forests and listened to farmers talking to each other. At night it called the farmers by name and lured them out of their houses to be devoured. It also imitated a sick person to lure dogs to their death.

Described as having the chest and legs of a lion, the head of a horse, the hindquarters of a stag, cloven hooves, a continuous ridge of bone in each jaw instead of teeth, and a mouth that stretched from ear to ear, it was a vicious creatures that could not be defeated by any weapon of steel.

The eyes of a Crocotta, with a thousand variations of colour, was believed to give the possessor oracular powers when placed under the tongue. 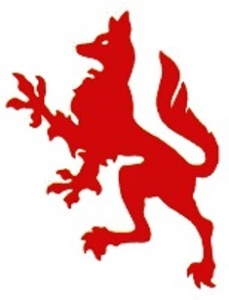 The legend of the enfield dates back to 1014 at the end of the fierce Battle of Clontarf in Ireland.

When King Tadhg Mor fell “fighting like a wolf dog” alongside the High King of Ireland Brian Boru, this mythical hybrid of fox, eagle, lion, and wolf emerged from the nearby sea to protect his body until his kinsmen could retrieve it for proper burial.

This was a big deal, since enemies would try to carry away bodies so they could tear them apart, demoralizing the soldiers. As it was believed the only way for honored leaders and loved ones to rest in peace was with proper funeral rites, a desecrated body would also result in the soul haunting the living world as a restless spirit.

Since then, an enfield was believed to guard the bodies of leaders, and it’s still used in heraldry, sculpted on old tombstones, and featured on crests like the London Borough of Enfield.

So these are 5 interesting fantasy creatures you probably never heard of. Did you know about any of them? I didn’t, and I know they would fit great in some of my stories.

Let me know what you think or if there are even lesser known ones in the comments.

4 Thoughts on “5 Fantasy Creatures You Probably Never Heard Of”